Macedonia is a region of Greece. Macedonia with the same name also references a different area, a country known as the Former Yugoslav Republic of Macedonia, and that had been part of the old Yugoslavia, and joined the United Nations as an independent nation with this name.  Greece claims the single name "Macedonia" for its section; nationalism, history, identity, all collide, see http://www.historyofmacedonia.org/MacedonianGreekConflict/shea.html;
and then, http://www.unitedmacedonians.org/macedonia/stefov1.html 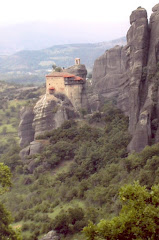